‘If we are not allowed to win our league, why should Liverpool be allowed to win theirs?’ Worthing owner left ‘gutted’ after FA call non-league division null and void with his side on the brink of historic promotion

By Andrew Warshaw for MailOnline

One of the country’s youngest and most courageous club owners last night accused the FA of wrecking his dream by snatching away promotion.

Nothing will ever match the pain George Dowell suffered in an horrendous car accident a decade ago that changed his life forever and left him paralysed from the chest down and confined to a wheelchair.

But the anguish of seeing his beloved Worthing denied the chance to play in the Conference South next season after dominating the Isthmian League has left the 27-year-old devastated after virtually saving the Sussex club from extinction.

Worthing were top of the Isthmian League and on course for a first ever appearance in the National League, just two steps below League Two

Last week’s ruling to declare the entire non-league pyramid below the National League null and void, while allowing the top two divisions to potentially complete their seasons along with the Premier League and Football League, has caused a wave of anger across the grass-roots game.

Not least at Worthing who were poised for their second promotion in five years under Dowell, who is no ordinary owner having ploughed some £800,000 – including his entire compensation from his accident in 2010 – into the club.

‘I didn’t just want to sit around doing nothing with the rest of my life,’ Dowell told the Mail on Sunday. ‘I just wanted to keep busy and what better way than to buy your hometown club.’

‘But I’m obviously gutted right now. Everyone appreciates that tough decisions have to be made in the current climate and that the priority is to stay safe but you have to treat everyone the same way. This ruling is completely unfair, it’s really harsh.’

Shortly before he bought Worthing for whom he played as a teenager with dreams of competing at a far higher level, the club were on the brink of going bust with around £200,000 of debt. The squad were told that they wouldn’t be paid any longer. It seemed as if over 100 years of history could come to end. 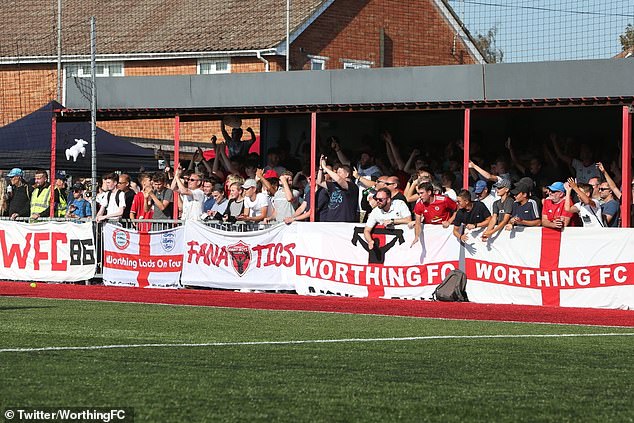 But Dowell’s rescue act turned him into an instant local hero with attendances that dwarfed that of every other team in Worthing’s league, three steps below League Two, and were even higher than many National League North and South crowds.

When the Covid-19 virus wiped football off the map, Worthing were seven points clear and on the verge of going up. Now their hopes have been shattered.

‘Why we haven’t been allowed to finish our season like the professional game may do I just don’t know,’ said Dowell. ‘Whenever football is allowed to resume, we could have completed our league in four weeks.

‘Everyone at the club has worked so hard. Money, time, effort. National South would have been the highest the club’s ever been. It’s heartbreaking.’

Given the trauma he suffered as a 17-year-old, when his neck was broken and his spinal cord severed, Dowell realises more than anyone that life is more important than football and understands fully why coronavirus has kicked football into touch.

It’s just the way Worthing and others have been treated that upsets him so much.

‘Promotion was my dream and it’s been pulled from under us. I don’t understand how the National League have been allowed to carry on. It’s not just affected us but everyone at our level. There should have been the same rule for all of us together. I don’t know why this has been allowed. Maybe because there’s more money involved higher up.’

‘If we are not allowed to win our league, why should Liverpool be allowed to win theirs? And if teams are promoted and relegated higher up the scale, why has a line been drawn at our level when money is even tighter, every penny counts and everyone is living on a shoestring?’

‘Our best players thought they were going to play at a higher level. Everything had fallen into place. It was like the perfect storm. Now we are going to have to start all over again.’