The sporting industry has taken a huge hit thanks to the coronavirus, with the suspension of the Olympics, the NBA season and Euro 2020.

Meanwhile, the enforced closure of large gatherings and gyms has put the kibosh on thousands of people’s exercise routines.

But star fund manager Terry Smith has not been put off and recently invested in sporting giant Nike at a knockdown coronavirus crash share price, adding it to his flagship Fundsmith fund.

It has not confirmed details of the investment, but reports of it slipped out recently.

One of the few reasons the Government has allowed for going outdoors under lockdown measures, is to exercise.

As a result, more people than ever are making the most of time outside and even those who would never have exercised outdoors have taken up sports and fitness regimes such as running.

Despite a closure of physical stores, this has in turn, led to increased online sales of activewear from companies such as Nike – and that is a story playing out not just in Britain but around the world, despite varying lockdown measures.

Smith seems to think it’s a trend that may endure. The star fund manager bought a £95million stake in global sports brand Nike in March – the first time his flagship £19billion Fundsmith Equity fund has invested in it.

As markets fell with record speed across the world, Smith said in a letter to investors: ‘Every cloud has a silver lining and we are seeing opportunities and have bought two new holdings which we have been following for some while and which have been hard hit in this market because of China exposure and a classic “glitch”.’

The other new holding was another global brand, coffeehouse chain Starbucks, in which he made an £80million investment.

That’s something investors might consider a surprising move, considering that a coffee chain like Starbucks would clearly suffer from enforced closures and people not going out or working from home.

But Smith’s investments show that even when markets are taking nosedive, professional investors can be on the looking for high quality large companies with strong brands and high growth rates when they look cheap.

This is Money has asked for confirmation of the new purchases though Smith has yet to confirm.

Smith bought Nike shares at the end of March, as markets tumbled over fears of the economic impact of governments worldwide enforcing lockdowns to contain the spread of the coronavirus.

From the start of the year to 12 May, Nike’s share price is down 10.3 per cent, but it suffered a 38 per cent fall towards the end of March – when Smith took his opportunity. However, the price has since climbed up 7 per cent and looks to be on the way to recovery.

But does that make it too late to invest?

Mark Nelson, analyst at Killik & Co, said: ‘We believe the sportswear sector may find long-term support from the crisis, as the public’s focus on individual health is intensified by the outbreak, and as exercise – one of the few freedoms that many societies have had during periods of lockdown – becomes more popular.

‘We also believe that the casualisation of fashion and the growth in athleisure may be extended by a structural increase in people working from home.’ 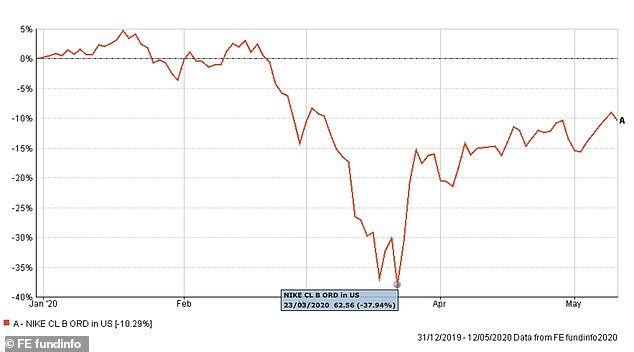 Nike is the world’s largest sportswear company, which sells its products through Nike-owned retail stores and digital platforms, and to major retail chains and independent distributors.

It is focused on six key categories including running, Nike basketball, the Jordan brand, football, training and sportswear.

Nelson said: ‘The company fits the description of a high-quality business with a strong track record in value creation as measured by elevated returns on capital employed and returns on invested capital.

‘High relative returns can indicate the presence of a competitive advantage for a company, and the question is then whether it is able to defend that advantage and its strong returns relative to the rest of its industry.’ 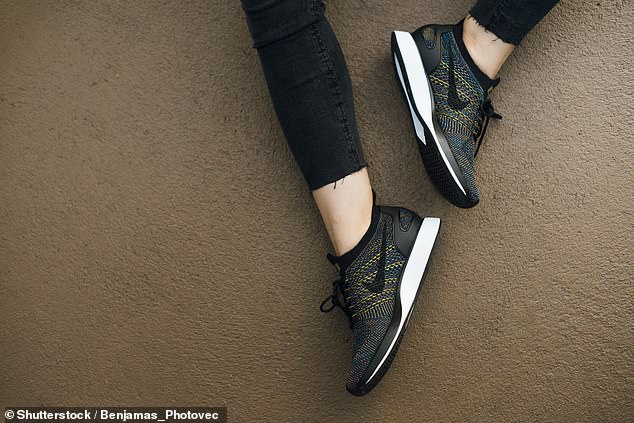 According to marketing consultancy Interbrand, Nike was ranked the 16th most valuable brand in the world last year, one of only two sportswear brands that made the top 100, and valued at roughly three times that of its rival Adidas brand.

Meanwhile its revenues are significantly higher than its peer group and over the past 12 months were almost twice as much as Adidas’s.

Nelson added: ‘Scale can allow for greater relative reinvestment back into a business in order to maintain a brand’s desirability and relevance, something which Nike is a master at, supporting its brand equity through several channels.

‘First, it does it through its partnerships with an unparalleled roster of the world’s leading athletes and sports teams. Second, through technical innovation which is used to improve the performance of its products but also the desirability of its brand.

‘The third way in which Nike invests to support its brand is through its well-developed digital strategy, which includes Nike.com and its ecosystem of training applications. These apps do things such as track runs or provide users with a variety of workouts that can be done at home.’

Another Nike product, Nike Training Club, has seen a huge spike in downloads alongside Map My Run by Under Armour and Strava.

We expect the strength of the Nike brand […] to help underpin returns for the company and in turn shareholders over the medium to long term.                 -Mark Nelson – Killik & Co

Meanwhile Bike brand Peleton has also seen a surge in mobile app downloads and spending after it announced a 90-day free trial, while in-app purchases also jumped 12.2 per cent, according to Apptopia.

A focus on digital has certainly come to the fore during the ongoing coronavirus outbreak.

The Nike Training Club workouts experienced ‘an extraordinary rise in sign up and engagement’, according to the company, and weekly active users across all of its activity apps increased by 80 per cent between the start of the year and the end of March.

‘Overall, while in the short-term the coronavirus outbreak will have a negative impact on sportswear spending due to physical store closures, we continue to believe in the long-term drivers of growth in the sector, some of which may find support from the crisis,’ Nelson added.

‘We view Nike as well placed to navigate the current environment, due to the strength of its balance sheet and its digital expertise, perhaps even gaining market share due to the relative struggles of others.

‘Looking further ahead, we expect the strength of the Nike brand, and the company’s ability to invest in order to support this most valuable of assets, to help underpin returns for the company and in turn shareholders over the medium to long term.’

How has Fundsmith fared during the coronavirus crisis?

Though Terry Smith’s £19billion Fundsmith Equity certainly hasn’t gone unscathed during the last few months as the coronavirus has rocked markets, it has fared much better than others.

Between the start of the year and the end of February it was down 4.3 per cent though still ahead of the FTSE World index loss of 5.9 per cent and its average Global fund peer which lost 6.1 per cent.

The same can be said for the following month – arguably the worst for markets so far this year – and when Fundsmith fell by 15 per cent on 16 March. The FTSE World however was down 22 per cent on the same day. 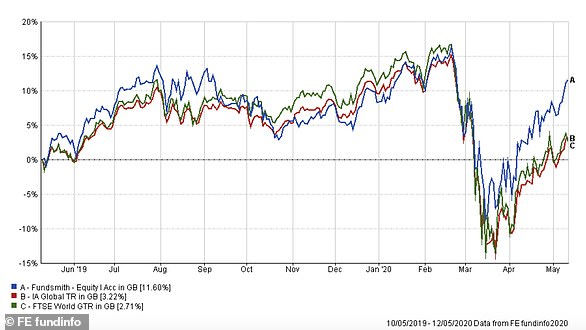 Despite significant falls in performance amid the March market crash, Fundsmith is back on a positive trajectory, with returns of 11.7% over one year to 12 May

Since then, the fund is back up by 20 per cent and is not far off from its highest levels from the past 12 months.

Since the fund was launched in November 2010, it has delivered an outstanding 374 per cent, significantly higher than the 160 per cent and 113 per cent returns for the FTSE World index and IA Global sector respectively.

Carluccios workers to be furloughed after landmark legal ruling