A father-of-three who has been left totally paralysed after developing locked-in syndrome has learnt to spell out words using his eyes.

Darren Leith has been ‘buried alive’ ever since he suddenly suffered a brain-stem stroke on April 28 2017.

The 50-year-old is able to think, see and feel but cannot eat, talk or move any muscles aside from his eyes.

Since his stroke, Mr Leith has been cared for at a neuro-rehabilitation centre in Southport, 100 miles away from his family home in Barrow, Cumbria.

The former painter and decorator has learnt to spell out words by pointing to letters on a board with his eyes. And during a recent visit from his children, he asked them to ‘take me home’.

Darren Leith has been left totally paralysed after suffering a brain-stem stroke in April 2017. Pictured in London with his now 23-year-old daughter Shannon in 2012, he developed locked-in syndrome and has learnt to spell out words using his eyes, the only muscles he can use 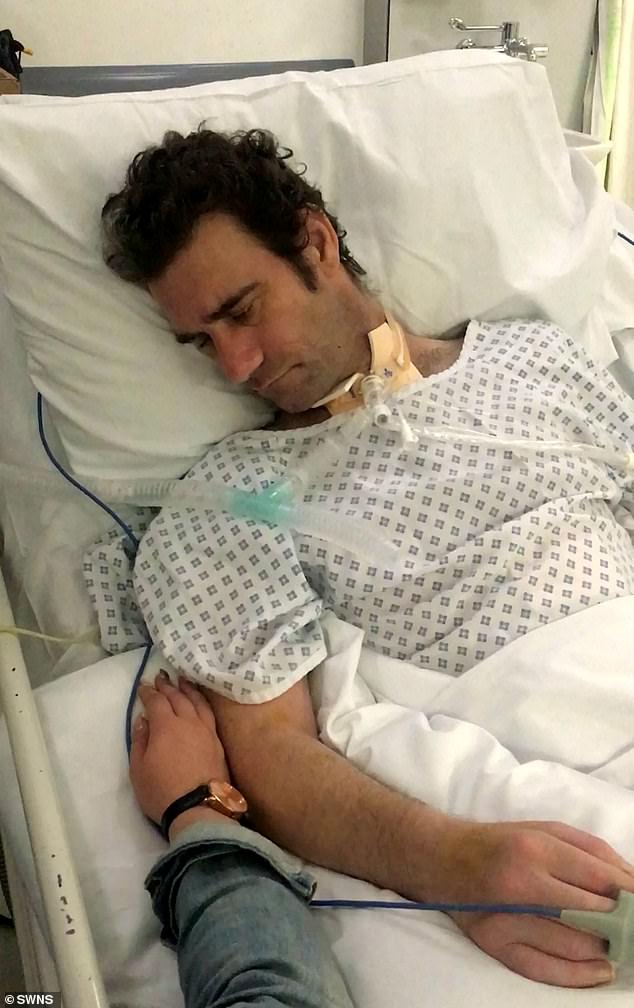 The 50-year-old can think, see and feel but cannot eat, talk or move most of his muscles 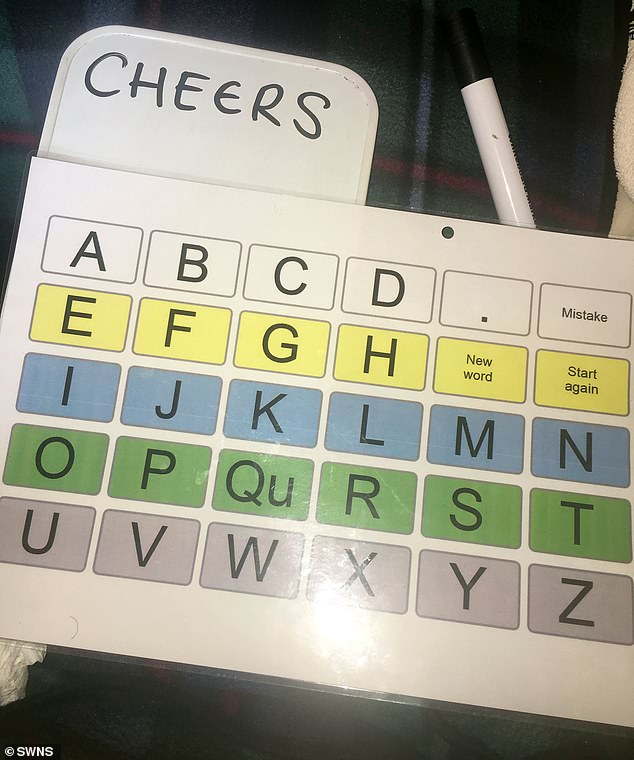 Speaking of her father’s ordeal, his 23-year-old daughter Shannon Leith said: ‘The last time I went to see him with my sister he said “take me home you two”.

‘I know he will be better off at home. It’s not fair to not have him there for two years.

‘He is so depressed and wants to be at home. It would be a dream for us. The last two years have been a living nightmare.

‘To have him taken away from us was the worst thing. We just want our dad back.’

Mr Leith, who is also father to Kristen Leith, 24, and 11-year-old Connor, was a keen kayaker and ‘lovely dad’ before the ordeal, with the parenting roles now being reversed so his children look after him.

‘All we want is for him to be happy,’ Miss Leith said. ‘The most important thing for us is to make sure his life can be a little bit better.

‘I know he misses home and I know how much he hates being away from his family.

‘When we go to visit him he smiles and is happy. But he does cry a lot when he’s alone.’ 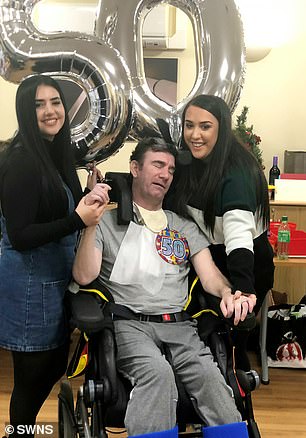 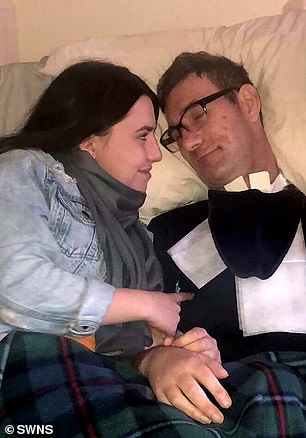 Mr Leith is pictured on the left celebrating his 50th birthday at Cleveland House, where he has been for nearly two years, with his daughters Shannon (left) and Kristen. Shannon (pictured right with her father) says he is ‘so depressed and wants to be at home’ 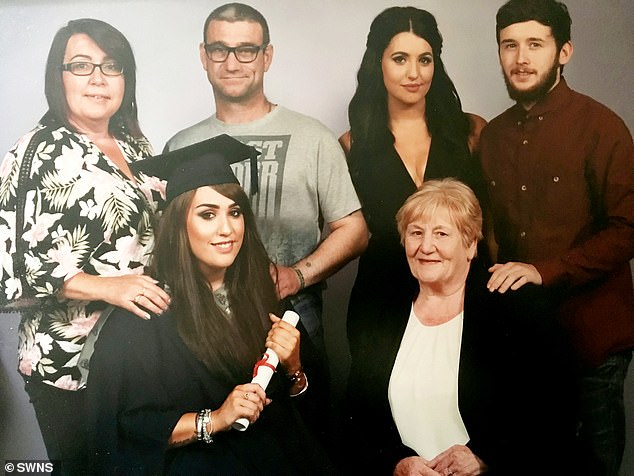 Mr Leith, who had been slurring his words, collapsed by his bedside after getting up on an ‘average’ Friday morning in April 2017.

He had been to his GP complaining of a headache two days earlier but was reportedly told it was just a migraine and sent home.

Mr Leith’s partner Kelly Freshwater, 43, called 999 and he was rushed to Furness General Hospital in Barrow-in-Furness.

Once he arrived, Mr Leith was placed into an induced coma while doctors tried to get to the bottom of why he collapsed. However, all medics could be sure of at the time was he had not suffered a heart attack or another type of stroke.

Mr Leith was woken from the coma on April 31 and found himself unable to move.

A neurologist was called in to assess Mr Leith, then 48, with the medic confirming he had suffered a stroke of the brain stem and was locked-in his own body. The stroke was reportedly not picked on in scans due to it being at the very base of his brain.

His daughter Shannon claims the specialist told her family only one per cent of people who have a stroke develop locked-in syndrome.

‘He told us he was completely paralysed but can 100 per cent understand everything we say,’ Miss Leith said.

‘I was in complete denial. It was just awful to be told that. We were told it is incurable and dad will be like this forever.

‘I struggled to cope to begin with. It was absolutely horrible. I laid in bed and just tried to imagine what it would be like for him. It must be a living nightmare. It’s like being buried alive.

‘I hang on to hope he will get better one day. I have been a mess since it all happened.’ 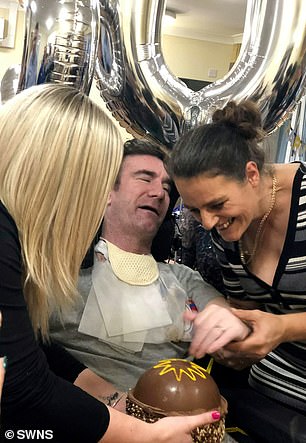 Mr Leith is pictured left being visited by his 11-year-old son Connor. Mr Leith (pictured right on his birthday) is ‘happy’ when he has visitors but ‘cries a lot’ when he is alone 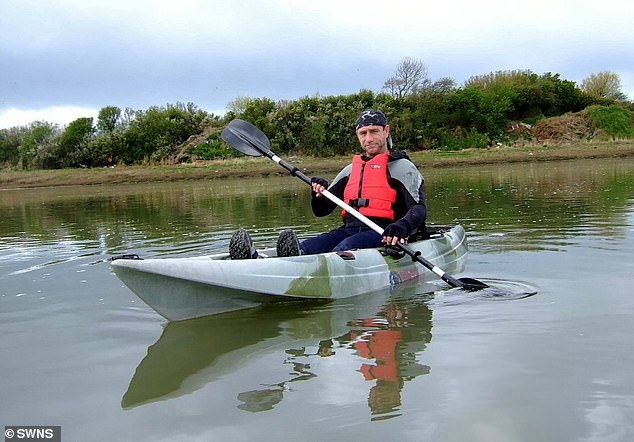 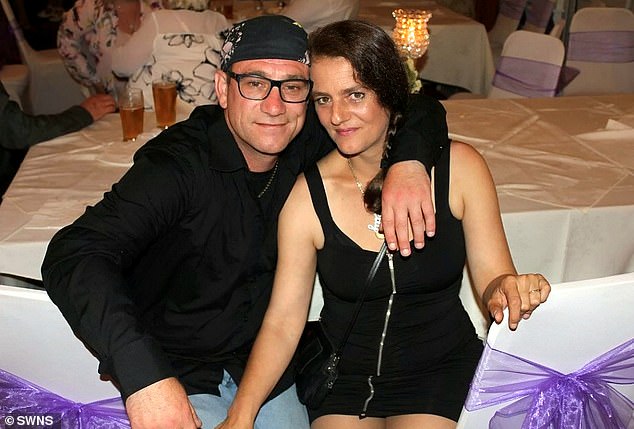 He is pictured before his stem stroke with his partner Kelly Freshwater, 43

Mr Leith spent the first eight months in hospital before being moved to Cleveland House in December 2017; a two hour drive away from his family.

He receives one-to-one physiotherapy at the centre. He fought hard to regain his muscle strength, and can now wriggle some of his fingers and lift his head from his pillow.

Mr Leith is also learning how to write on a white board and stand using a tilt table, with specialists being optimistic his muscles may one day remember how to move again.

‘He’s trying to get stronger and stronger all the time and he is making progress,’ Miss Leith said.

‘But he does best when he’s with us. He gets strength from spending time with his family. If he is with us all the time, we can spend much longer trying to help him.

‘We can give him the encouragement he needs.’

The family hope to adapt their home to fit in a stair lift, mobility equipment and specialist bathroom supplies.

Miss Leith claims his loved ones are also working overtime to save up as much cash as they can. Donate here.

WHAT IS LOCKED-IN SYNDROME?

Locked-in syndrome is a rare brain disorder that causes complete paralysis of all voluntary muscles except the ones that control eye movements.

Sufferers are conscious but cannot speak or move. Their cognitive function is usually affected.

Locked-in syndrome is caused by damage to the brainstem that contains nerves that transmit information to other parts of the body.

Such damage usually occurs due to a lack of blood flow or bleeding following trauma.

Patients are unable to chew, swallow, speak or move, aside from their eyes, however, they can see and hear.

Most sufferers are bedridden and dependent on their carers.

Treatment focuses on relieving the underlying disorder, such as bleeding, if possible.

Patients may need tubes to help them breathe.

Small tubes are also inserted in their stomachs for eating and drinking.

Sufferers can be taught to communicate via their eyes.

We tell you how to beat the medicine shortage with expert-approved...