Manual labourers — such as brick layers, road diggers and factory workers — have a 55 per cent higher risk of developing dementia than office works, a study found.

Researchers from Denmark found that physical work wears down the brain — as well as the heart, muscles and joints — because it’s the ‘wrong sort’ of exertion.

Exercise was previously thought to lower the risk of developing dementia, but the results indicate that the type of activity is important in securing the benefits.

The findings could lead to vulnerable individuals being screened early, before memory loss and confusion emerge — at a time when treatments are more effective.

Manual labourers — such as brick layers (pictured), road diggers and factory workers — have a 55 per cent higher risk of developing dementia than office works, a study has found

‘Before the study we assumed hard physical work was associated with a higher risk of dementia,’ explained paper author and public health expert Kirsten Nabe-Nielsen of the University of Copenhagen.

‘It’s something other studies have tried to prove — but ours is the first to connect the two things convincingly.’

The traditional view has been that exercise typically serves to reduce the likelihood of dementia. In fact, a recent study from the same university showed that a healthy lifestyle — such as regular walks, or cycle rides — can halve the risk.

Furthermore, the World Health Organisation (WHO) also lists physical activity as an important factor in staving off the condition.

‘But our study suggests it must be a ‘good’ form of physical activity, which hard physical work is not,’ said Professor Nabe-Nielsen.

In their study, Professor Nabe-Nielsen and colleagues analysed data from 4,721 Danish men who participated in the so-called Copenhagen Male Study.

The men were polled during the 1970s about the nature of the work they performed — which included positions in 14 large local firms, including rail operator Danske Statsbaner, Danish Defence and the Copenhagen Telephone Company.

In the subsequent decades, researchers have collected health data on each of the participants, recording — among this — any cases of dementia that developed.

The team’s analysis accounted for other factors that might be linked to either causing or preventing dementia — including whether or not the participants smoked, exercised and had either high blood pressure or body mass index.

The findings indicated that manual labour was associated with a 55 per cent higher risk of developing dementia than undertaking sedentary forms of work. 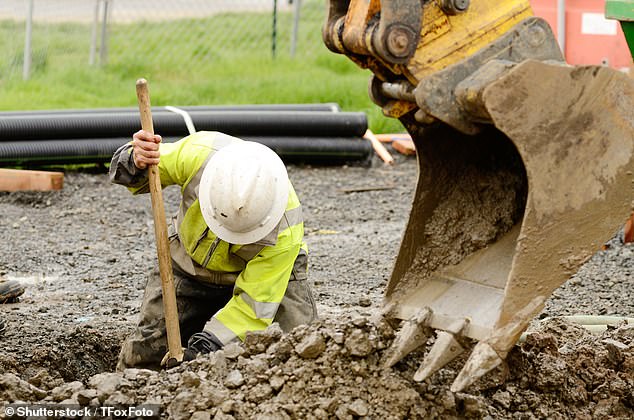 Researchers from Denmark found that physical work wears down the brain — as well as the heart, muscles and joints — because it’s the ‘wrong sort’ of exertion. Exercise was previously thought to lower the risk of developing dementia, but the results indicate that the type of activity is important in securing the benefits

The researchers hope that their study will serve to highlight in the importance of early health interventions — as dementia-related changes in the brain begin long before an individual leaves the labour market.

In fact, past studies have shown that the first signs of dementia can appear decades before the onset of noticeable symptoms.

‘A lot of workplaces have already taken steps to improve the health of their staff,’ said paper author Andreas Holtermann, of the National Research Centre for the Working Environment in Copenhagen.

‘The problem is it’s the most well-educated and resourceful part of the population that uses these initiatives.

‘Those with a shorter education often struggle with overweight, pain and poor physical fitness, even though they take more steps during the day and to a larger extent use their body as a tool.

‘For workmen, it’s not enough for example to avoid heavy lifts if they wish to remain in the profession until age 70.

‘People with a shorter education doing manual labour also need to take preventive steps by strengthening the body’s capacity — via, for example, exercise and strength training.’

Professor Nabe-Nielsen said that studies have suggested that hard physical work reduces blood circulation — cutting down the oxygen supply to the brain.

This may also lead to the development of cardiovascular diseases like high blood pressure, blood clots in the heart, heart cramps and heart failure.

With their initial study complete, the team are continuing to assess their results — with a view to identifying healthier ways of doing physical labour.

To this end, they have begun to collect data from social and healthcare assistants, child care workers and packing operatives, among others.

They plan to produce interventions meant to organise the workers’ days in such a way that they benefit from an ‘exercise effect’.

The researchers said that they hope to see companies successfully change work procedures accordingly — ensuring, for example, that heavy lifts will have a positive effect rather than wear down the workers.

With no cure in sight, there is an increasing focus on lifestyle measures — such as exercise and diet — that are known to be protective.

The full findings of the study were published in the Scandinavian Journal of Medicine & Science in Sports.

WHAT IS DEMENTIA? THE KILLER DISEASE THAT ROBS SUFFERERS OF THEIR MEMORIES

Dementia is an umbrella term used to describe a range of progressive neurological disorders (those affecting the brain) which impact memory, thinking and behaviour.

There are many different types of dementia, of which Alzheimer’s disease is the most common.

Some people may have a combination of types of dementia.

Regardless of which type is diagnosed, each person will experience their dementia in their own unique way.

Dementia is a global concern but it is most often seen in wealthier countries, where people are likely to live into very old age.

HOW MANY PEOPLE ARE AFFECTED?

The Alzheimer’s Society reports there are more than 850,000 people living with dementia in the UK today, of which more than 500,000 have Alzheimer’s.

It is estimated that the number of people living with dementia in the UK by 2025 will rise to over 1 million.

In the US, it’s estimated there are 5.5 million Alzheimer’s sufferers. A similar percentage rise is expected in the coming years.

As a person’s age increases, so does the risk of them developing dementia.

Rates of diagnosis are improving but many people with dementia are thought to still be undiagnosed.

IS THERE A CURE?

Currently there is no cure for dementia.

But new drugs can slow down its progression and the earlier it is spotted the more effective treatments are.

Fossils: Neanderthal who fell down a well and starved to death 130,000 years ago had buck teeth

Mowing your lawn just once a month could attract 10 times...

NASA satellite images the waterways of Venice are now empty during...