By Cian Cheesbrough For Mailonline

Manny Pacquiao has revealed he has tested negative for coronavirus after the eight-division boxing world champion came into contact with a politician who had contracted the disease.

The 41-year-old, who also serves as a senator in the Phillippines, was pictured with fellow senator Aquilino Pimetal – who subsequently tested positive for COVID-19.

Pacquiao, largely considered as one of the greatest boxers of all time, said he had already quarantined himself and has used an unapproved rapid testing kit from South Korea to see if he had been infected.

‘My countrymen, I would like to make it clear that even before I received the letter from [Dasmarinas Village, Makati] Barangay Captain Rossana Hwang, I already started home quarantine,’ Pacquiao said in a statement.

‘Please don’t worry. I received rapid testing kits from my friends from South Korea. Using these kits approved in Korea, I tested negative. The FDA [Food and Drug Administration] hasn’t approved them yet but these are what’s used in Korea.​

The rapidly-increasing numbers of those infected by the disease around the world has led to facilities to test the kits being in short supply in several affected countries.

‘I’ve been encouraged a while back to get tested at RITM [Research Institute for Tropical Medicine], but I want to let it be known that I have not felt any symptoms. 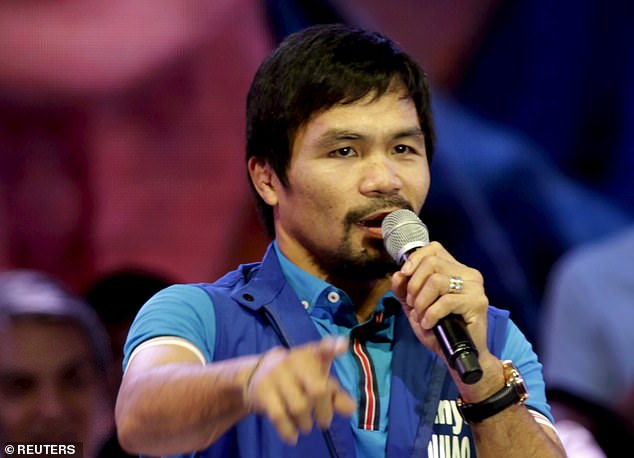 ‘It’s an entirely different conversation when I’m feeling something strange in my body. I am willing to undergo swab testing for the sake of my family and my country, but I will go through the regular procedure.

‘I believe that there are many more persons under investigation or PUI that should be prioritised in testing.’

Pacquiao had previously revealed he was ‘not afraid to die’ to help people in the Phillipines affected by the disease in the Philippines.

There have been 1,418 reported cases in the country so far, with 71 casualties as the worldwide death toll reaches 30,000.

Eddie Jones predicts ’60 per cent’ of squad is going to...